Bambi in the Wind River Canyon

This is a true wildlife story from right here in-the-middle of the Wind River Canyon.  It cannot start out as a happy tale, but may finish with an uplifting ending.  No person will ever know the real ending of it though, they go where we will never be able follow.

Several weeks ago, my wife informed me that on the way home she saw a deer dead just south of our cabin.  When you're driving in-the-dark in the state of Wyoming you are gambling, and the payoff is nothing short of horrid.  It was a female mule deer...known as a doe, and she'd been nursing!  The fawn was nowhere around.

Then one warm canyon afternoon there he was, his white spots practically glowing in the blazing mountain sunshine; our Bambi, the lost fawn.  I sneaked out with the big Tamron lens, and while hiding behind some wild roses snapped off a few photographs.  I watched this lost fawn for quite some time.  You will never see a deer fawn out by itself, never.

The very next morning this little spotted fawn was out eating greenery again.  It was a little too early for a fawn to be weaned, but this little one had no real choice in the matter.  Our little Bambi eventually wandered up into the junipers for some sleep.  I saw the fawn, out by itself, nearly every day and I always took some pictures while hiding behind those same wild rose bushes. 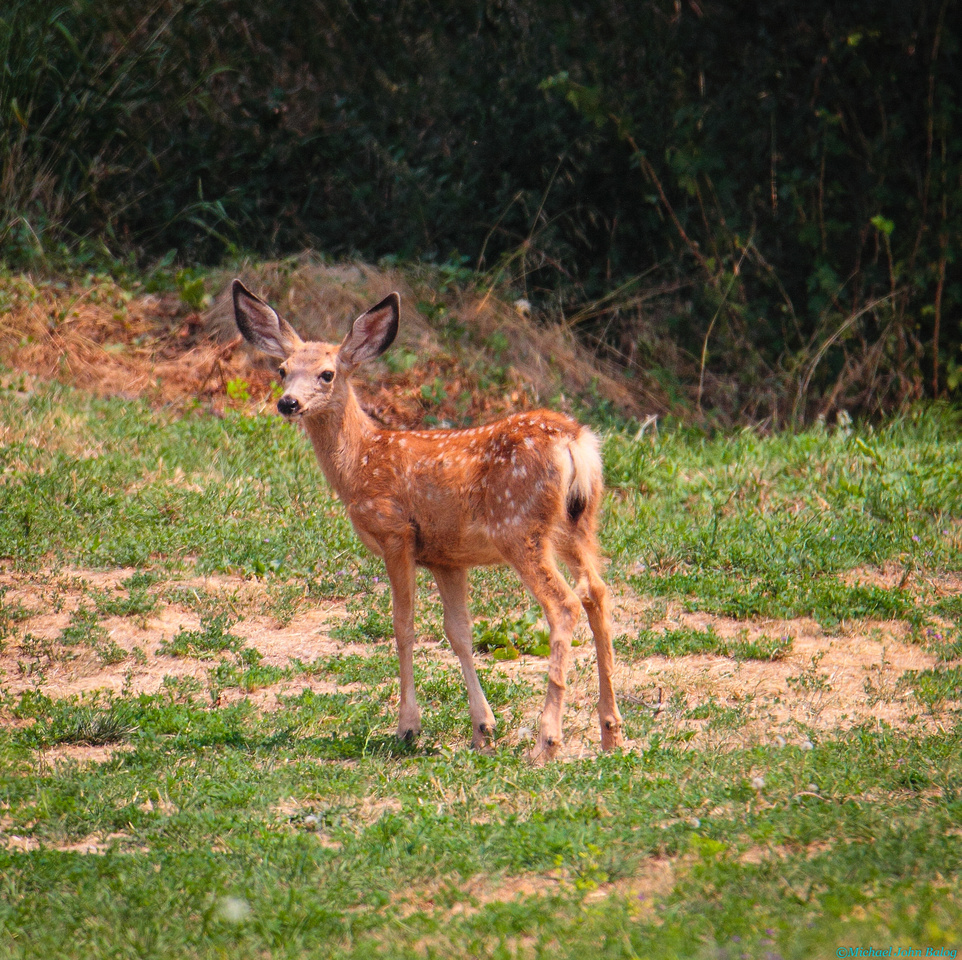 Late one night under our mercury light the big stags were down.  These big bucks are huge, well fed stags that are never hunted in the Wind River Canyon, so they are friendlier than deer almost anywhere else in Wyoming.  And guess who is with these mountain stags?  Our little Bambi, the lost fawn, found some relatives.  You would think that this was a great solution to the fawn's problem of having no mother, but buck deer are notoriously lousy mothers.

The fawn tried to nuzzle up to the largest of the three stags and was shoved off several times.  A younger stag didn't seem to mind as much, but the biggest of the bucks actually turned, and under the big light shoved the little fawn away with his monster velvet antlers!  Bambi didn't seem to mind, and he walked back to the youngest.  I watched these stag deer with their tiny, spotted follower several nights in a row.

Then last weekend I came down with a terrible cold-virus; thought I was gonna die.  I tried to keep an eye out for our lost fawn and was more depressed when I didn't see any deer at all.  If anything is dead around the Wind River Canyon in warmer weather the vultures show up for dinner; none of the ugly vultures gathered.  I hoped that this was a sign our little orphaned fawn was still alive, but I hadn't seen him; he has two little nubs on his noggin.

At six o'clock this very morning the stags were eating breakfast, and there was our little orphaned Bambi right beside the youngest of the bucks!  I watched from the kitchen door with an old pair of astronomy binoculars, then walked outside in my underwear!  I flashed an old Indian sign I'd learned from an old Indian, and the huge stag deer and I just exchanged eye contact; I had known his father, the buck on my website, HogbatsPhotography.com.  He had lost an eye fighting during the rut, and probably died of an infection.

One advantage the orphaned fawn has is the protection he will inadvertently receive from these big buck deer.  He will learn from the stags the very best places to eat, and where to sleep in safety.  He may have trouble keeping up with the stags, but this too will make him stronger.  But as winter sets in he will not be able to follow the bucks up into the high-country.  As the mating season begins later this month, they will all run into a group of doe; the females will take him in I am sure.  Another true story of survival in the Wind River Canyon.

Thank you for reading this week's Wind River Canyon Blog.  All the photographs and true wildlife stories on my blog, and on my website are protected by copyright laws that are ignored throughout the galaxy.  All rights are reserved anyway!

All content is produced by Michael John Balog who is a resident of the Wind River Canyon for two decades.