After taking some much needed time away from writing my Wind River Canyon Blog, it's nice to be re-energized.  I wasn't sick really, just bored and thought I had nothing worthy to write about, if that makes any sense at all.  In many years it's the first time that I've taken this much time off from writing anything; I found out I missed it more than I thought I would.

Ben Franklin never publicly voiced an opinion about our nations symbol being the Bald Eagle and preferring the Wild Turkey.  This idea comes from a letter he wrote to his daughter in 1784.  He writes about the "lazy" Bald Eagle stealing fish from the Osprey, and I have many times observed the Bald Eagle feeding on roadkill, too.  I have also observed Bald Eagles here in the Wind River Canyon snatching Rainbow Trout right out of the Wind River!  It is an awesome sight to behold, and that's a genuine fact.

The Bald Eagle is a raptor and that comes with certain caveats. They are true hunters but will eat something squished on a roadway.  Ben Franklin wrote that the Bald Eagle is "generally poor and often very lousy."  Now here is a guy that never spent time in the mountains observing and studying eagles!  And lets face it, Bald Eagles are beautiful compared to the genuinely really ugly Wild Turkey. 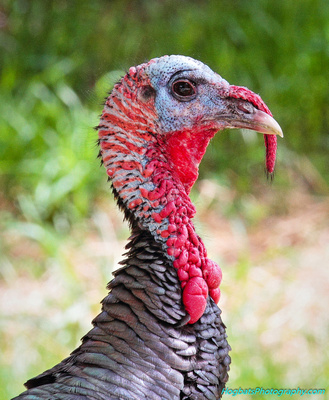 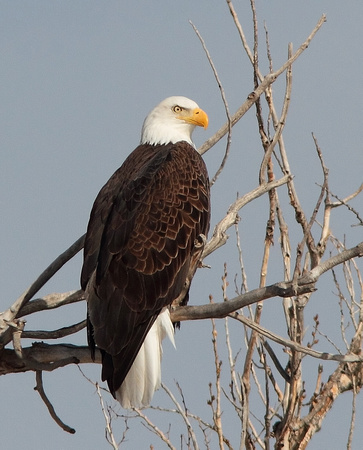 We had last winter the only surviving member of a female Wild Turkey (Hen) and her six little babies (poults) on the back step of our cabin; her and her five poults were all killed in the road here in the canyon!  This one lonely female would sleep in the sun on our step.  She often would fly to our roof looking for her mom and siblings and make sounds that spoke to her being so alone here in the Wind River Canyon.  I felt so sorry for her and said that I had hope of another Wild Turkey showing up here in the canyon to keep her company.

It was late winter that magic happened; five Wild Turkeys showed up in our backyard!  Where they came from is a mystery; it's many, many miles to any of their habitat.  She now had friends, as Wild Turkeys are very sociable birds----unlike Eagles.  We now had six with three hens and two adult males (Toms) and one young male.  I wondered out loud what was going to happen in the springtime.

The middle of June the Hens brought down their baby turkeys; twenty-one of them!!  What a crowd and what a surprise it was.  And of course they brought them to our backdoor for the sunflower seeds and cracked corn that our one survivor had gotten used to; we feed all the little finches and birds.  The Hens had them here at our cabin in the canyon every day, and I would often sit on the bench and observe them for hours at a time; the Toms were scarce at this time, but that too would change in time.  The video below is a cute glimpse!!!

Now we had over two dozen Wild Turkeys that came to visit and feed, every, single, day!  Wild Turkeys are just as opportunistic as Bald Eagles, but a lot friendlier than a raptor.  You've heard the saying, "They're so ugly they're cute."  Now I know what it really means!  And I spent many hours observing their behavior, because that truly is the real joy of living in a wilderness, the learning----and a racetrack running down the middle and idiots for drivers.

What I learned still shocks me to my core.  The five adult Toms are the most self-centered living things I have ever studied!  They chase away, snap and scare their own young ones to stuff themselves, then go sit under our pine trees.

When I put cracked corn and seed out for their yearlings and the other birds and one small brown squirrel, and some cute chipmunks, the Toms will get up and run over to chase away the eighteen or twenty surviving yearlings and eat some more when I know they cannot possibly be so hungry so soon.  If a human father did such behavior he would weigh four hundred pounds and authorities would take away his hungry children!

When I hear an "expert" who has little time in the field say that they just want to pass along their genes, it makes me sick.  These are their genetic offspring they are scaring away again, and again.  Their motivation is quite simple; they want to survive the winter so they can have sex next spring!!!  These are birds----Big Birds, but with birdbrains!  Any other behavior that is read into this is just anthropomorphic----period.

Ben Franklin had it all wrong, these are not some noble birds; they are birds.  Small brained with basic motivational smarts----smart enough to know whom is dumb enough to give them quality seed when it is thirty-below zero!!!  But they are a lot of fun to have around; all they do is eat and poop; and play and socialize.  The photograph below was taken day-before-yesterday; it is an image of eleven? or so yearlings and Hens. 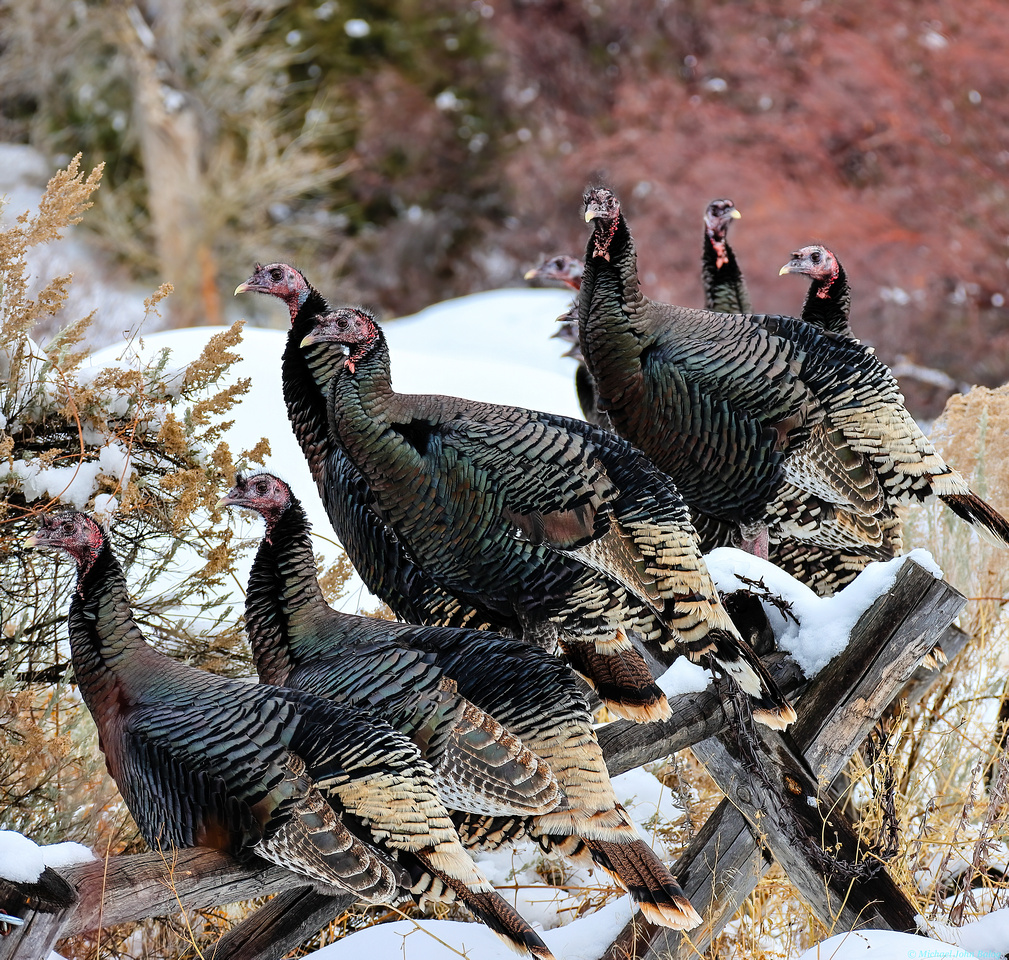 And no, after spending a zillion hours observing them, I don't think the Wild Turkey should have been chosen as our Nations symbol; they're just so damn ugly.  What kind of symbol would that be?

Thank you for your valuable time.

Personally, I prefer hummingbirds.  Visit my website HogbatsPhotography.com for images of many, many dozens of birds, hummingbirds, raptors, deer, marmots, Bighorn Sheep and the amazingly friendly Wild Turkeys.

*Below is a photograph of a Rufous Hummingbird from right here in the Wind River Canyon.  The white background is not a computer trick, it is a nineteenth-century exposure trick taken early on a warm summer morning.