As travelers race through the Wind River Canyon at highway speeds, little do they know of the wildlife unseen in this isolated wilderness.  Even after twenty years living in this magical canyon, I'm constantly fascinated by the wildlife that live within it's golden walls-of-stone.  I've photo-documented over 110 species of birds, along with the Bighorn Sheep that are always on the move.

During the snowy winters of Wyoming there is a really cute wild animal that makes tunnels and lives under all this snow.  Their tail is shorter and their ears smaller than the less adorable Mickey Mouse.  They have babies by the dozens (no fooling) and are the food for every meat-eater out in the wild.  Many people confuse them with an ugly underground, similarly named, distant relative.  When the snow does finally melt I have weird tunnels all over my yard, and all over the grassy hillsides.  These little wild animals are the Vole, also called meadow mice.  You may have seen Yellowstone coyotes, wolves and foxes hunting them in recent films on our National Park.  Here is a picture of two taken close-by our cabin. 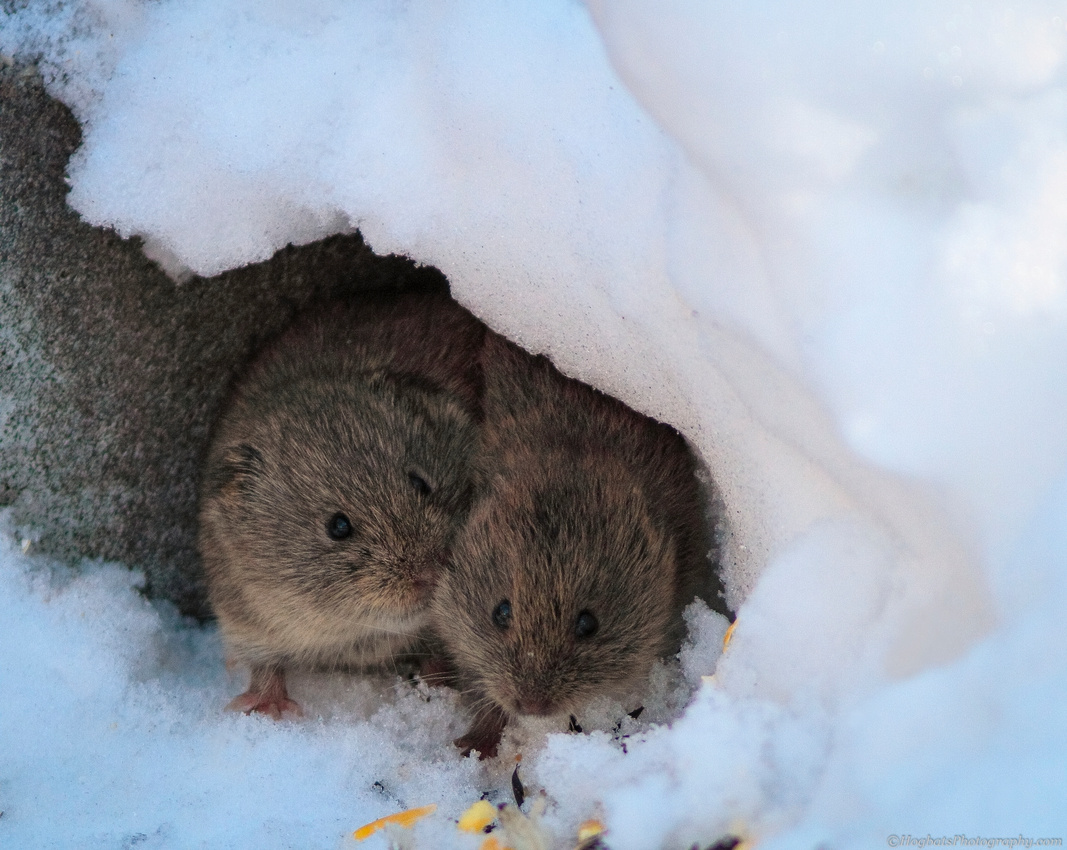 One female in a lab setting had over 80 babies in one year! There are over 155 species of Voles.  They are very prolific!

Many of the birds I photograph regularly are unseen even by the few people that live in the Wind River Canyon; they don't eat seeds.  But the really unusual visitors are those I see only once or those species that really aren't supposed to be here at all.  One of my favorites arrived during a blizzard, never to be seen again!  This Red Crossbill just sat there and let me crawl on my belly like a snow-snake to take this portrait; he just didn't seem to care.

I grew up in Cleveland and never thought I'd ever see a Blue Jay again, since they aren't nearly as far west as the canyon.  Yet one fall day two arrived to fatten up at my feeding stations.  It took some cunning and stealth to get the image I had in my mind, and they were only here for two days! 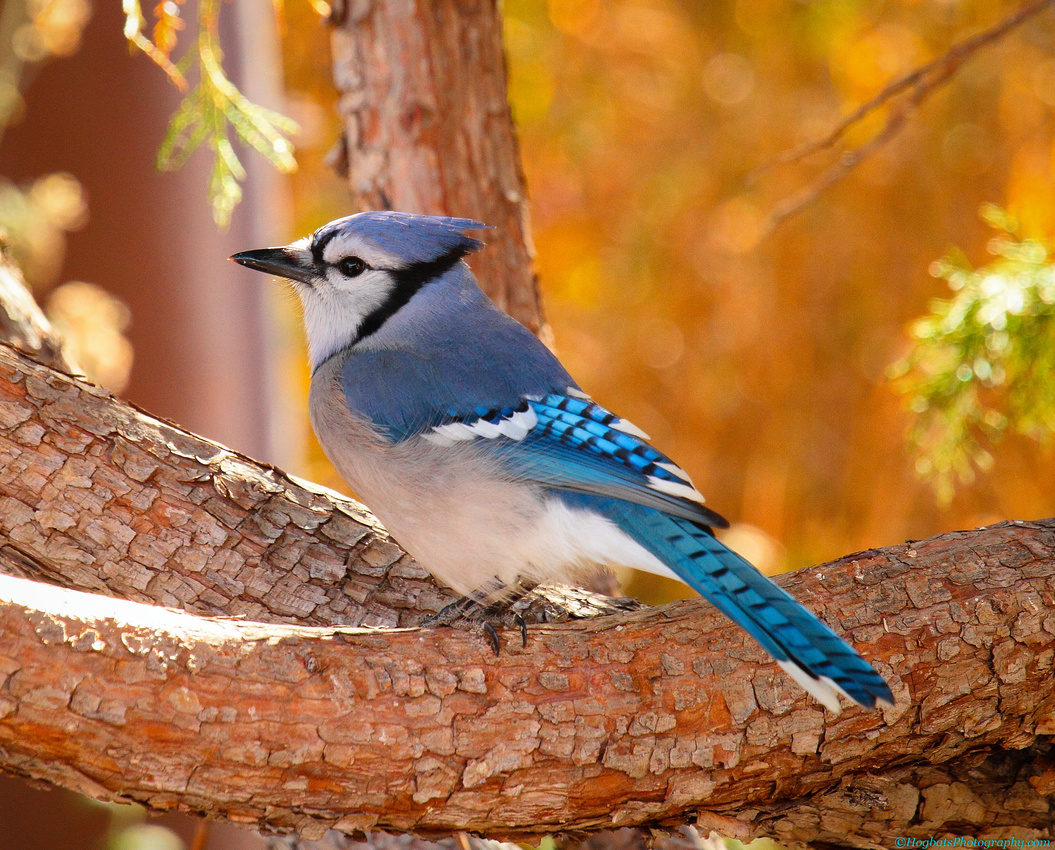 One day a bird was making a racket by the bird feeders!  I'd never seen one of these before; what is it?  I took lots of pictures while standing on a picnic table, then went to my books for identification.  It was a Pinon Jay and was never seen again....

For three years in a row, every spring, a Rose-breasted Grosbeak spent several days here in the Wind River Canyon.  He was really out of his home base, as they are never even as far west as central Nebraska, yet here he was, that fabulous color on his breast was magnificent!!

When I go out and search for them, I can't find a single Bighorn; where are they?  But as I keep an eye constantly open for wildlife, there are Bighorn Sheep down by the Wind River!  Look, there are eight on the hillside----look, there's several females, called ewes.  They travel constantly which makes finding them problematic in the huge Wind River Canyon.  Below is a selection from my Bighorn Sheep gallery on my website, HogbatsPhotography.com.  All these Bighorn Sheep were photographed here in the Wind River Canyon. 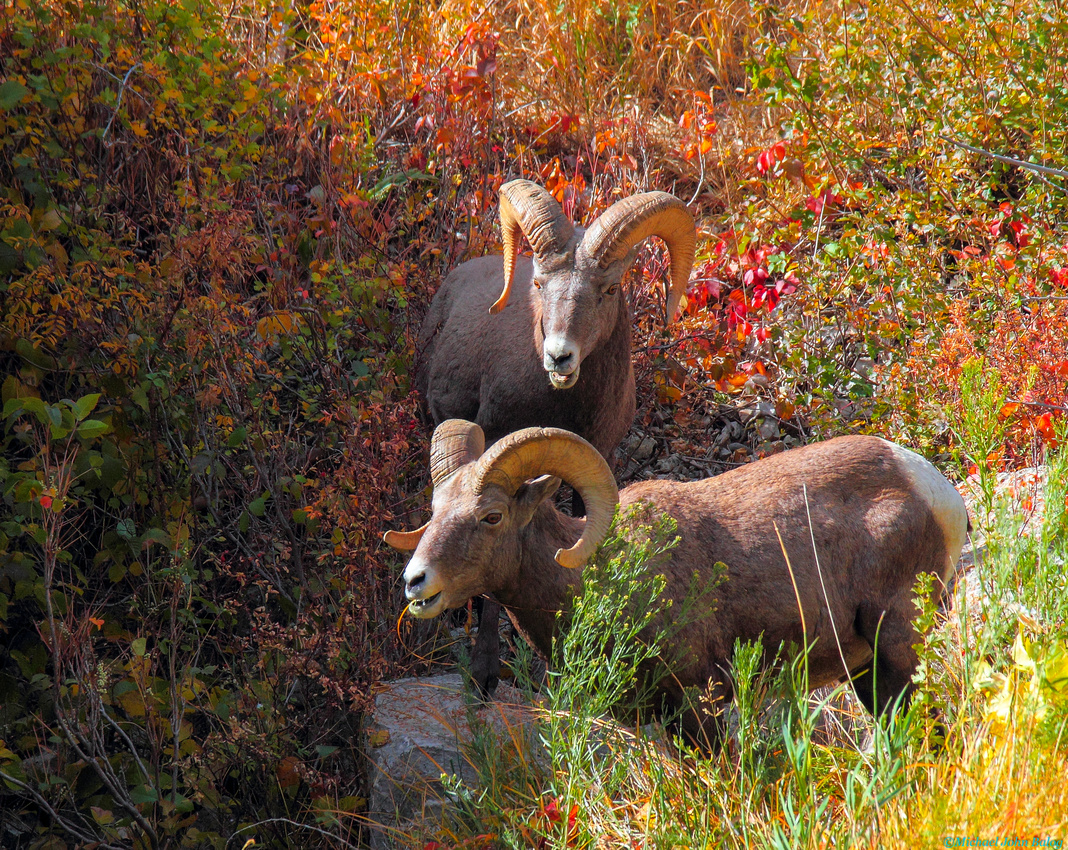 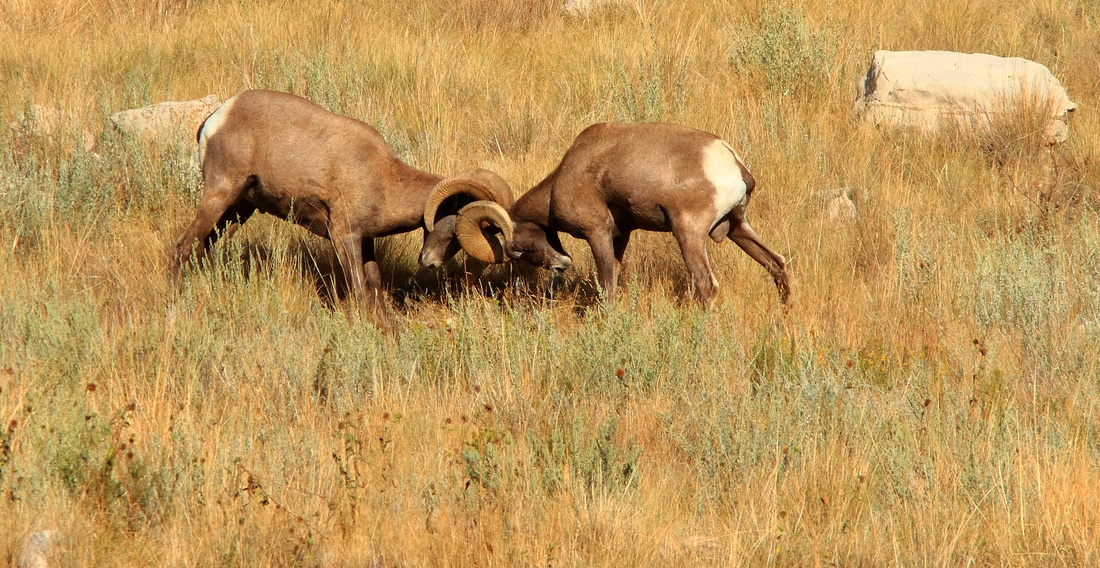 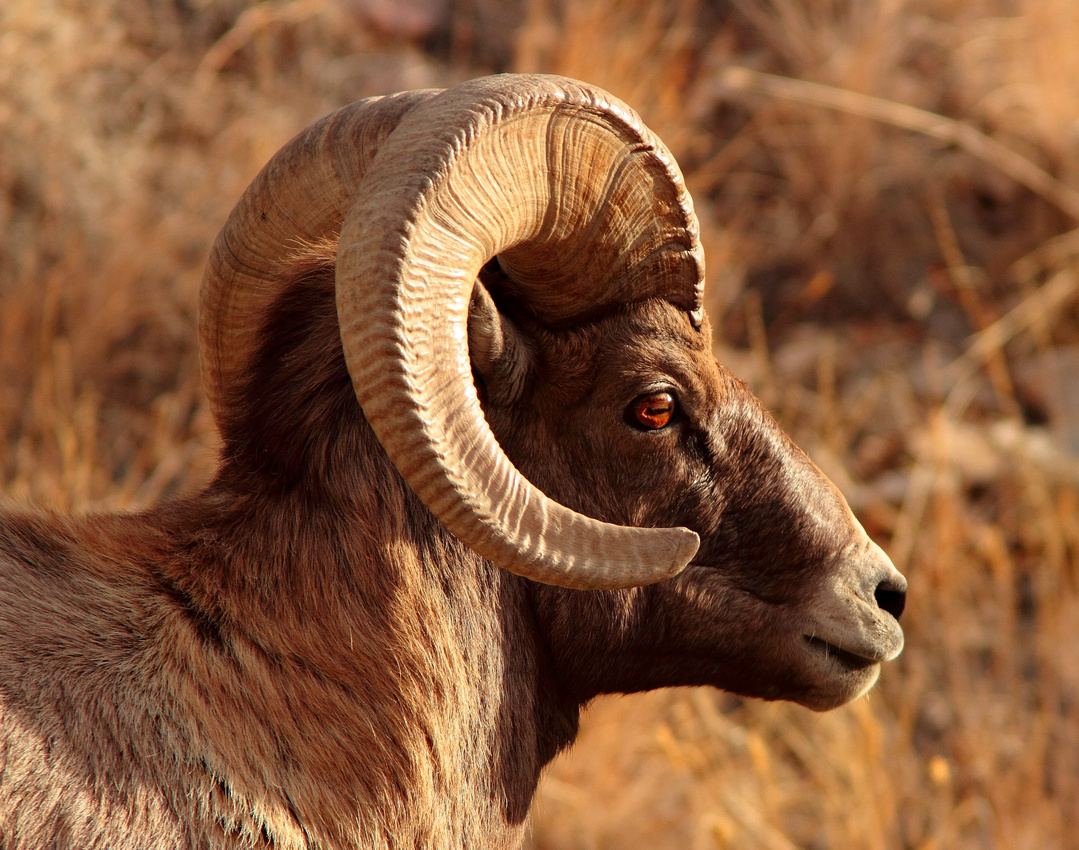 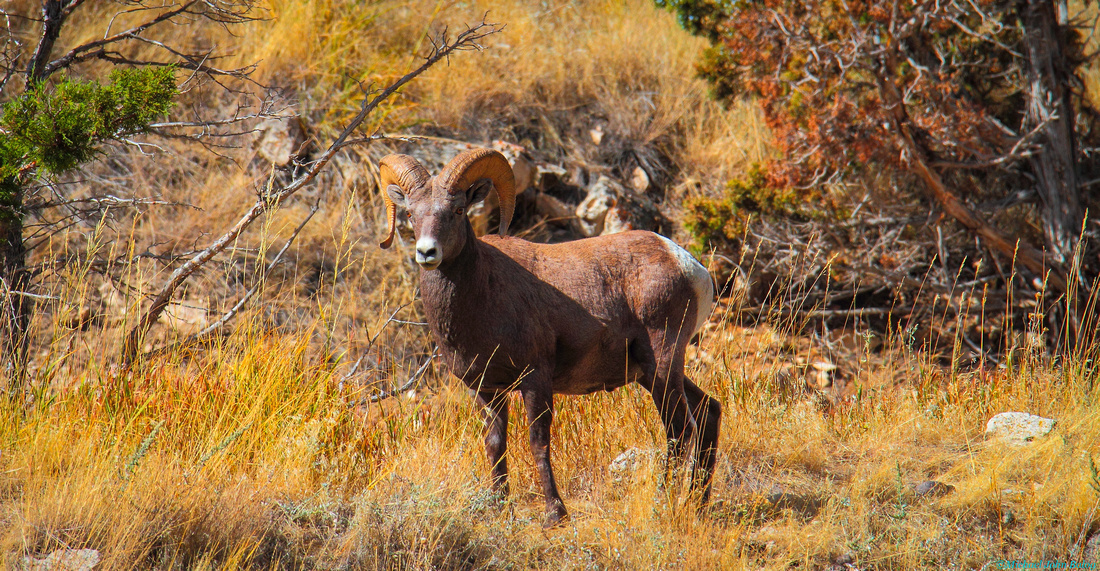 The littlest wild animals in America are seldom seen except for a mere glance that lasts only seconds at the very best.  These tiny birds are loved by everyone.  Most people cannot identify individual species of hummingbirds, yet they breed here in the canyon every single summer.  I have documented baby hummingbirds born here every year, and the FOUR species that are seen in the Wind River Canyon.  Here are photographs of the four male hummingbird species seen in the canyon; females and baby hummingbirds are very difficult to tell apart from one another. 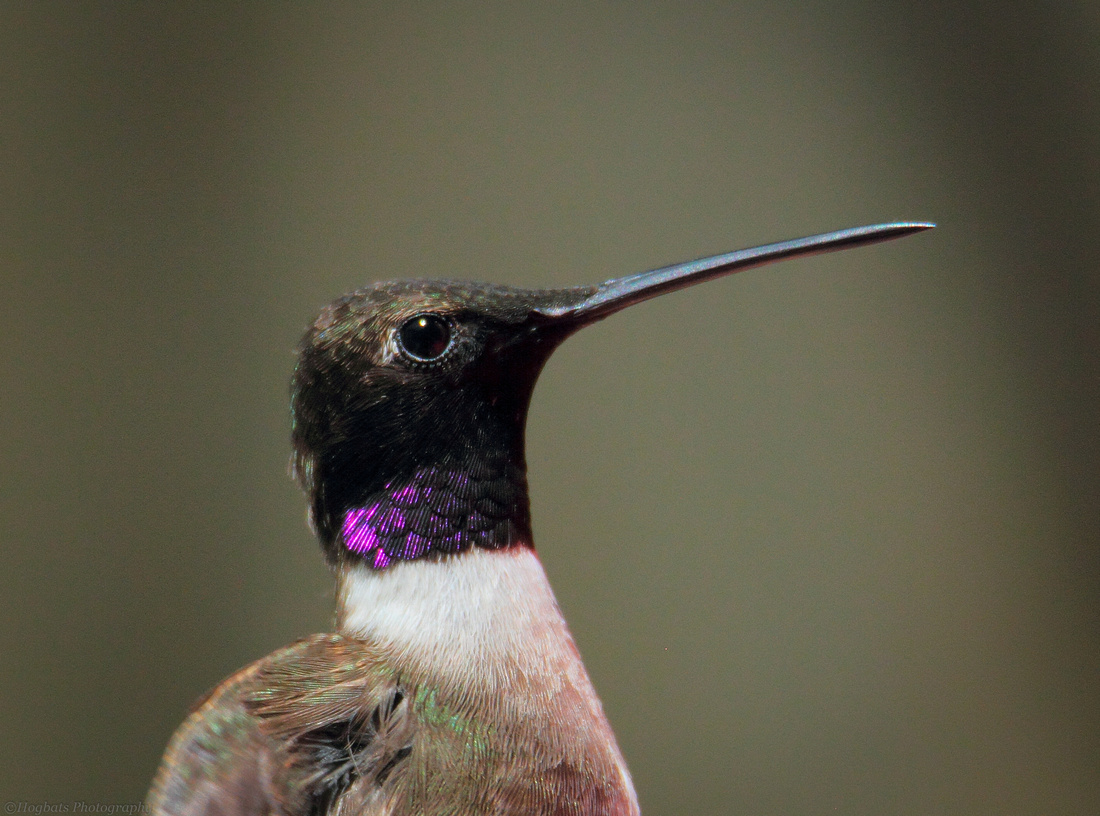 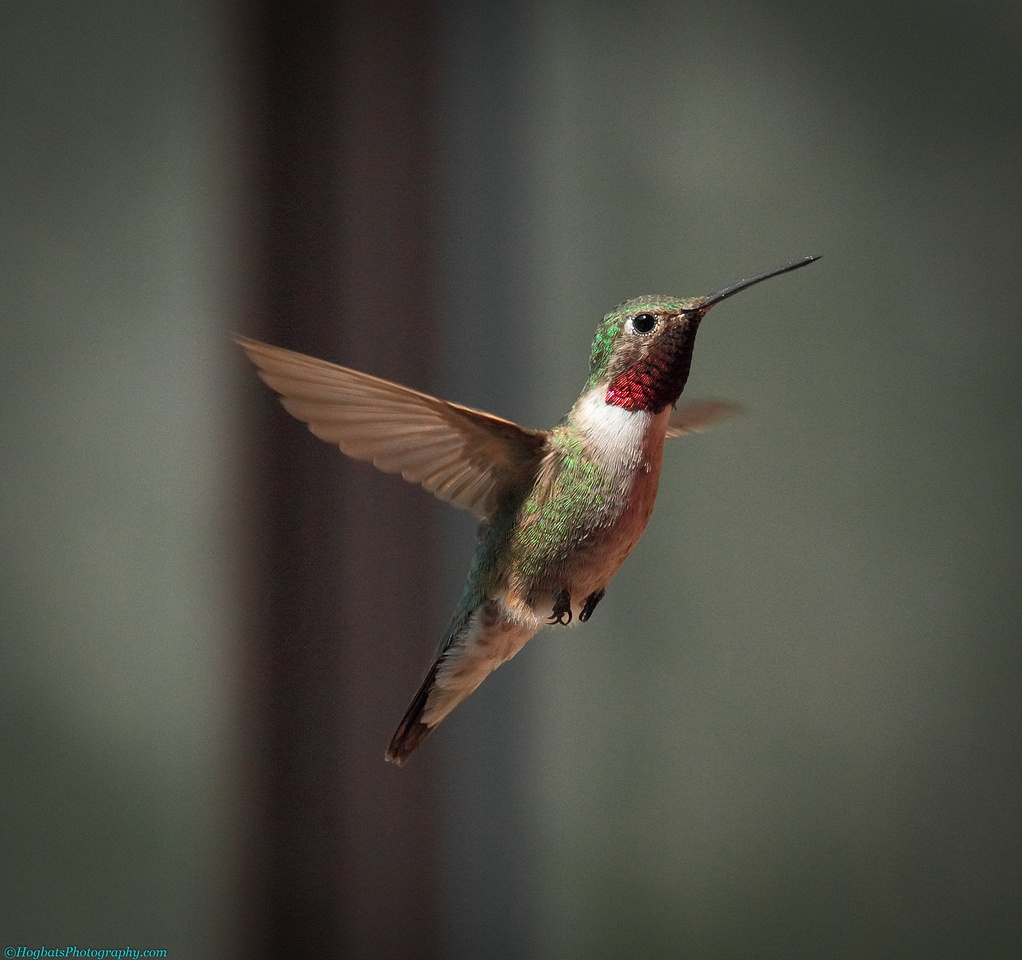 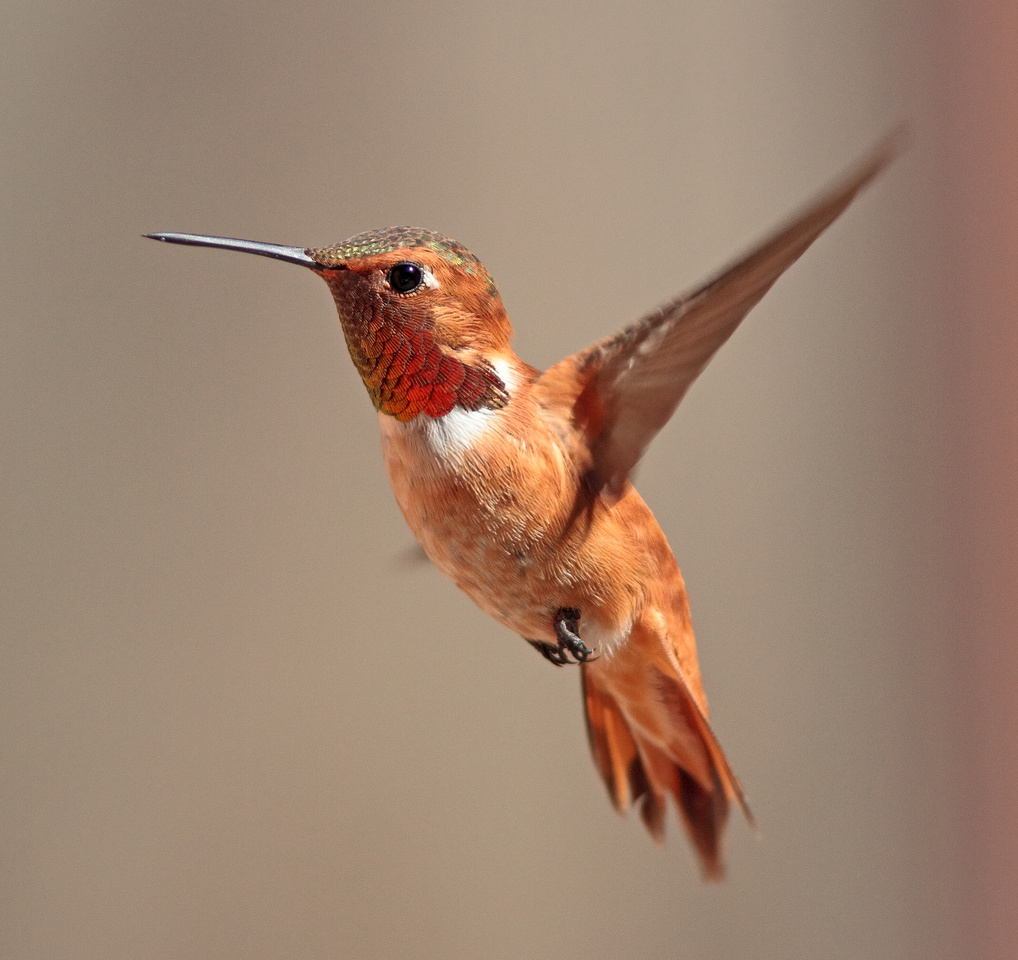 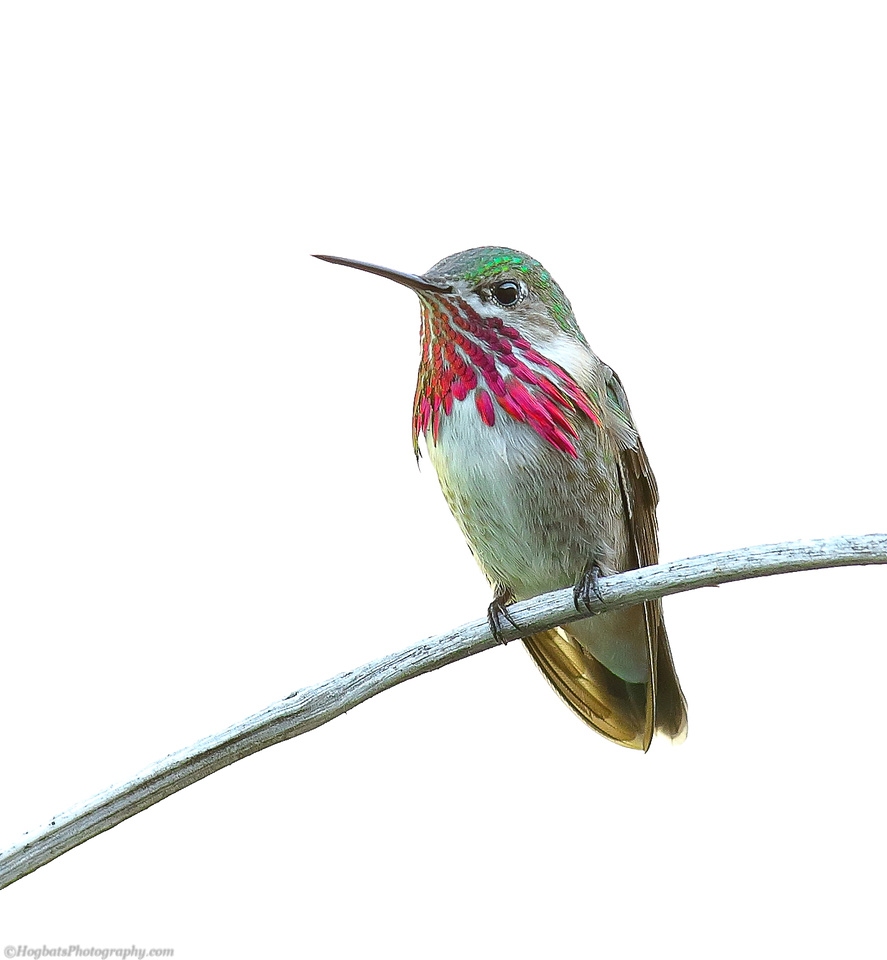 I could go on and on and on, but it would be much more educational for you to visit my wildlife website; it is very safe and I guarantee that you will learn and see things that you didn't know existed or haven't ever seen for yourself.  Click on this safe link for more wildlife from the Wind River Canyon in wild Wyoming----HogbatsPhotograpy.com

Thank you for your valuable time and reading my Wind River Canyon Blog.

*Post Script:  Every year I receive a flu-shot, and this year I got the flu and it nearly ended my time here.  I've not written or photographed a thing in quite some time, and the winter has been really nasty here in the canyon.  After nearly three weeks I finally made it to my doctor, then stopped off for one of those expensive hamburgers; that night I had to deal with terrible food poisoning from a tasty, pink, under-cooked burger that I pointed out at the time to my wife!  With my resistance all messed up a rhino-virus has tried to run me over, too.  But it looks like I'll make it after all......