"Keep your camera ready" isn't just a snappy saying that I've written in my Wind River Canyon Blog many times, it's a steadfast rule when you live in the wild places of Wyoming; wildlife tends to appear like magic.  For instance, two days ago, Thursday, May 3rd, I had been out of the shower for a short time and noticed a hawk on an electric pole, maybe a hundred yards away!

While watching this raptor scan the field for prey, he opened his wings and sailed down like a parachute, almost in slow-motion.  My mouth dropped open as I lost sight of this hawk; a beautiful winged display to be sure.  A very short time later, I don't know how long, he reappeared in the air, huge wings catching the afternoon canyon breeze.

I couldn't do much through a window at that distance, and I was mostly naked, and that's sure to scare away any raptor.  Slipping on some slippers and grabbing my favorite flannel shirt, I headed for my big-rig camera case; which is near a backdoor of the cabin.  Making some quick adjustments to my camera (ISO and shutter speed) I raced out the screen door still half undressed.

It was a Red-tailed Hawk (Buteo jamaicensis) and he landed on the top of a pine tree about half-way between where he'd been and my back, which was up against the house.  Setting the Tamron 150-600mm F/5-6.3 Di VC USD G2 @ 500mm, I watched this gorgeous raptor as the image-stabilization kept the image sharp in my mind, too.  Even after chasing raptors with cameras for twenty years now, my heart still races at the sight of these fascinating birds.

This raptor saw me as I watched him through the lens; it seemed time for him to leave; I was ready with my finger on the shutter button.  It's said on Wall Street that timing is everything, and it's the same for wildlife photography.  As this spectacular bird took to the air, I let loose with a burst of 8 frames per second till the hawk was too far away to be of interest.

Of the more than a dozen frames I had, only two blew me away!  The first two digital files of this hawk taking off were really cool, and I worked them in my usual wildlife manner; Digital Photo Professional, then Lightroom.  Couldn't decide which photo I like better, my wife couldn't either, so I printed them both large (12" by 13") to get a real look @ the pictures. 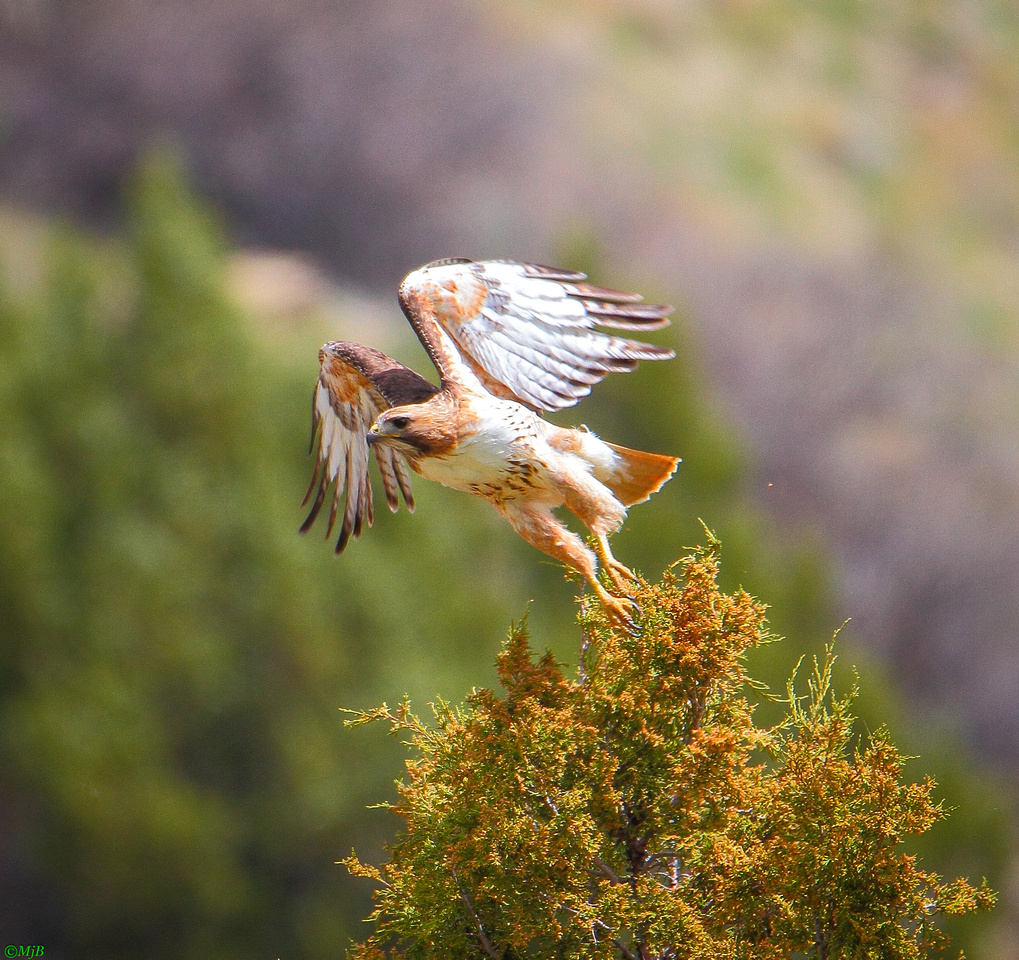 This morning we were watching pine tree pollen swirling in the Wind River Canyon, like smoke from a forest fire, as the sun broke the eastern rim of the canyon; puffs of it rising like a blown-out candle.  The Red-tailed Hawk in the photographs has knocked off a couple of these tiny pods and the lens/camera captured these very small modules of allergy induced sneezes in my wife.  The tail of the hawk in the second image is in fine display, and his wingtips like fingers touching the canyon wind.

In summation, real wildlife photography is not something that poses for you.  Wild animals are working for survival in a world that's more difficult for them than ever before.  They are assaulted from all sides by our civilization; many will not be here for our grandchildren.

Thank you for your time and reading my Wind River Canyon Blog.  All these true wildlife stories and photographs are created and produced by Michael John Balog, and are protected by copyright laws recognized throughout the galaxy.

Till next time...."keep your camera ready."  Maybe keep some clothes nearby, too!